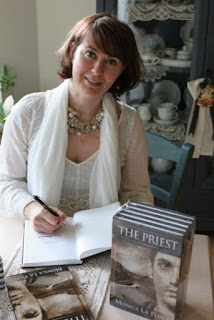 1.) Monica, your novel "The Priest" is available and from looking over your blog it appears your next novel is soon on the horizon. Can you tell us about your writing, your novels, and your characters?

The Priest is the first book in The Ginecean Chronicles, soon to be followed by Pax in the Land of Women, and possibly next fall by the last chapter in the story, Prince of War. The Ginecean Chronicles are set in an alternate Earth where women rule over an enslaved race of men. In the Ginecean society, love between a woman and a man is considered a perversion. The only pure union is between two women. My characters are real persons with strengths and weaknesses. They pay for the choices they make along the way and learn to live by them. Sometimes they make good choices, sometimes they don’t. My writing resembles playing a role playing game. When I start, I have a general idea of what I want to talk about and the kind of atmosphere I want to depict, but no details. While I write, every sentence makes the next one necessary. It’s like looking at a crossroad and deciding which way to go: left or right? If my characters go left, all the possibilities lying on the right path don’t exist anymore, and so on and so forth, until the resulting story is the only one possible. I don’t have a strict layout. Sometimes my characters stray from the path I envisioned at the beginning of the story. Maybe they evolved in a way that made possible only certain choices, but as long as their actions are plausible, I’m fine with the result. To read an excerpt from The Priest go to the Amazon page for The Priest. 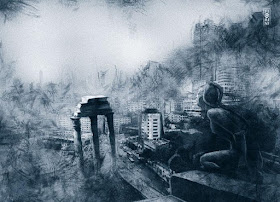 2.) If you could meet any one of your characters, who would it be and why?

It would be the Priestess in Pax in the Land of Women. She’s an evil character, but not completely black and white. I like villains who can commit atrocities, but still be real persons. The Priestess is a woman deeply flawed. Ginecean society put her in a place where she has no choices but to be what she is. She is the most tragic of characters because she doesn’t deserve absolution, and that aspect of her made me sad when I was creating her.

3.) Who are some of your favorite writers?

4.) You are also an artist. What mediums do you prefer to work in, and what draws you to art?

I dabbled with watercolors in the past, then when mold ate most of my works I switched to acrylics. One day there was no room anymore in my house to show my canvases, and I went digital. Now I mostly paint on my Wacom tablet. I also use cold porcelain, inexpensive homemade clay, to create from flower arrangements to gnome houses. I love seeing paintings and sculptures emerge from an idea. When I see a blank canvas, I see all the images that could emerge at the end of the painting process. Then, at the first stroke, one of the many images becomes the one. To see some of my drawings, go here. 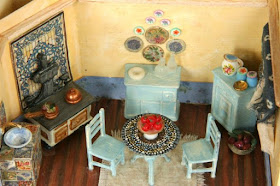 Same thing as with painting and sculpting. I love creating. In the miniature’s case, I can build entire micro-worlds and imagine all the stories taking place inside those universes. Quarter inch scale is my favorite, it allows you to build realistic miniatures, but with the added bonus of being compact and easy to display. To see my quarter inch scale project, go here. 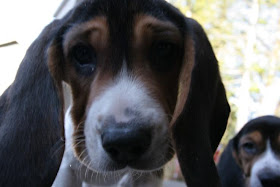 6.) Besides being writers, we have something else in common. Beagles! Can you tell me about your love for these loud beasts

Beagles are the cutest, sweetest dogs. I wish we lived in the country so I could have as many beagles as I want, without neighbors complaining of the noise. What noise? Our furry babies used to go to Beagles Trials and chase rabbits, and it was such fun standing in a field with twenty/thirty of them, barking, bawling, and making a ruckus for every leaf falling on the ground. Good times. Since retired from field trials and having lost his brother, Nero, my remaining beagle, is now my writing companion; an ever-present shadow by my side. Whenever I feel a scene isn’t coming the way I want, I take five minutes of pet-therapy and everything is fine after that.